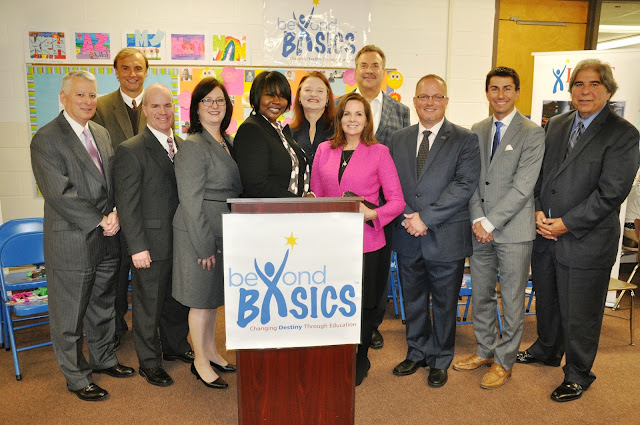 When 23rd District Court Judge Geno Salomone dreamed of bringing every pupil in the Taylor Public Schools up to standard reading levels by the third-grade, he dreamed big. His dream resulted in the creation, in 2011, of the Taylor Reading Corps. However, the reading corps could never reach the lofty goal.

Move the calendar to Thursday, October 27, at Myers Elementary School on the City’s southwest side. Key leaders in Taylor and elsewhere met to announce a partnership between the reading corps and Beyond Basics. Beyond Basics is a 501(c)(3) child-centered, literacy nonprofit serving students in the Metropolitan Detroit public schools since 2002, by providing reading tutoring and literacy enrichments for students in grades Pre K to 12th-grade during the school day.

Beyond Basics, funded in part by a $75,000 grant from the Taylor Community Development Corporation, will attempt to achieve what the all-volunteer reading corps could not – and post the data that proves the program is working. Unlike the TRC, which attempted to improve reading through volunteer tutoring district-wide, Beyond Basics is focusing only on Myers Elementary School, where pupils have struggled with reading proficiency.

“This is a game changer,” Judge Salomone said. “Enhancing education through reading and writing is the key to the success of the students in the Taylor School District. There is a direct correlation between a person’s lack of education and the increased probability of becoming a defendant in court.”

Most studies have shown that if students do not reach proper reading levels by the third grade, they likely will never catch up. The mission of the reading corps was not only to accomplish that fact, but to provide the data that would prove it. While the TRC’s mentoring helped pupils improve their skills, it never accomplished the total task – which is where Beyond Basics comes in.

Beyond Basics is known for getting students in K-12 schools reading at grade level in six to 10 weeks.

This new partnership between the Taylor Reading Corps and Beyond Basics would not be possible without the significant financial support of their community partners – McKinley Properties; The PNC Foundation; Taylor Community Development Corporation and the Taylor School District.

In May 2016, Beyond Basics collaborated with Principal Tamara Jones-Jackson of Myers Elementary School and ran a publishing center at the school for fourth- and fifth-grade students.  Beyond Basics introduced the programs to the school prior to starting tutoring initiatives in September. Beyond Basics provides one-on-one programs where trained and certified tutors work daily with students during the school day.

PHOTOS FROM PRESS CONFERENCE BELOW:

For further information on Beyond Basics, click here: http://beyondbasics.org